Elad David's photographic artworks from recent years include studio and outdoor scenes in black and white and color, using a variety of techniques such as digital camera, scanner, and even cell phone camera.

His work originates in an intimate and personal place. It is influenced by past events and current experiences and touch on subjects such as gender, family, home or urban environments, and the photographer–subject relationship.

Some of the scenes are staged, and others are a result of unintentional encounters while strolling.

Elad explores the medium by digitally processing some of the images while leaving others, especially the portraiture, as raw images.

Sometimes Elad includes personal texts in photographs, as titles or integrated into the image. He attempts to avoid mediumistic constraints by also using additional means such as text, painting, scanning and duplication.

In his portrait photos, Elad lets his subjects take center stage within the frame. Portraits allow for an in-depth discussion regarding his relationship, as a person and as a photographer, with his subjects.

While both sides are inherent to the image, this platform also deals with the question of exposure. Subject's willingness to be exposed and vulnerable in the eye of the camera, and photographer's exposure as his personal observation and intimate viewpoint unfolds through the final image.

A broad view of Elad's body of work reveals an additional theme that can be found in almost all of his works, the gaze. While his process and technique evolved and became more precise and aware, the depiction of subject's gaze remained unchanged.

In an unaware and unintended manner, this gaze has developed into a subject matter of itself.

"When I participated in shows," says Elad in one of the interviews he gave," I noticed that beyond my own perspective, as a human and a photographer, and the image subject's, a third one, rich with content and meaning is present: The view of the spectators."

Elad's photo shooting action is indicative of his personality. Be it objects, landscapes or portraits, the photographic medium reflects his inner self in the most personal and revealing way. His action is repetitive and obsessive, seeking perfection.

"As far as I am concerned" Elad indicates "the photograph is never ready and finished, in the sense that one can consider a artwork complete." 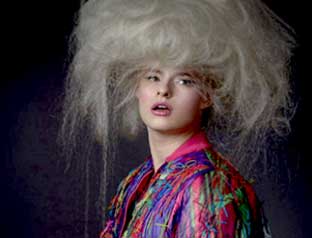